The chakra system has existed for centuries as a system of energy centers. Described in Indian texts known as the Vedas between 1500 and 500 BC, it was described as an energy center system. A lot of powerful symbols and elements are included that can assist us on the path of self-development and spiritual growth. Isn't it interesting to learn that every color in the visible spectrum can affect our moods, according to Psychology Today?

We feel balanced internally when we are surrounded by colors that represent the chakras. There are seven chakras, each with its own color, vibration, symbol, and meaning. Learn how chakra symbols can transform our reality!

There are various spiritual elements associated with chakras. The symbols and vibrations of each of these stones help us to balance chakras and stimulate the flow of prana through the body. Let's take a look at some of the symbols associated with the seven energy centers and the seven wheels of energy located within each of us.

The color of each resonating color from the visible spectrum is also associated with a specific chakra's meaning and vibration. In chakra rituals and meditation, chakra colors can be used to enhance each chakra's potential. Chakra. A color By activating the chakra's potential, it can help remove energetic blockages in the chakra it governs.

There is a Bija mantra or seed syllable for each chakra. They are used for chanting during meditation, and have a specific frequency that helps unblock the chakra they resonate with. Chanting enables prana to move throughout the body. By activating different energy centers, it promotes well-being and inner balance.

Their purpose is to help connect seven vortexes that are aligned with Sushumna Nadi (the Channel of the Absolute). The connection between the Root Chakra and the Crown Chakra is enhanced by the Sanskrit syllables.

Six of the Bija mantras are pronounced aloud, but the seventh is silent. It is the highest chakra and the closest to the Divine. It represents the highest level of awareness, ultimate stillness, and supreme intelligence. To connect with the Divine or find peace, one must go beyond producing sound vibration.

At the base of the spine is the Root Chakra or Muladhara, the first and lowest chakra. The name translates into ``root and foundation.`` It is associated with the earth element. The chakra has a red color and the seed syllable is LAM.

As a cosmic energy, Shakti symbolizes movement, power, and energy, which is associated with red in Muladhara. This represents human beings' evolution into evolved beings capable of consciously creating their own reality with the power of their consciousness.

In its role as a chakra symbol, red denotes action, drive, passion, and the desire to move and experience physical life in order to pursue spiritual advancement.

The Root Chakra symbol represents the four main states of mind in Muladhara, and they symbolically expand from the center of the seed.

It is believed that the sacral chakra is located below the navel, beneath the perineum. It is said to influence the sex organs and the kidneys, though this does not appear to be supported by scientific research. The color orange is associated with the water element.

The color orange symbolizes fulfillment and sensuality. It stands for joy, warmth, and unfailing enthusiasm. A color associated with creativity and expansion, orange is also the color of sexuality and sensuality. Sacral chakra color signifies freedom of spirit and the power of stimulation we experience through our senses, which supports the creation of ideas.

A flower with six petals represents lower qualities such as anger, hatred, jealousy, desire, cruelty, and pride. In order to master the six qualities and balance the Sacral chakra, you must rise above them.

As the flower blossoms, the six petals represent the conscious mind's limitations and dangers and it's overcoming.

Psychically, a crescent Moon facing upwards is associated with feminine aspects. The circle represents continuous, cyclical change and the flow of life.

The Crescent Moon in Svadhishthana symbolizes the overflowing energy that constantly moves and changes shape, like a tide. Crescent Moons are chakra symbols of Feminine power, and especially the recognition and acceptance of our bodies' power as embodied in our feminine selves.

The third chakra, the Solar Plexus or Manipura, is located under the rib cage in the stomach area. In Sanskrit, Manipura means ``city of jewels`` (mani = gem, pura = city).
The seed syllable of this word is RAM, which is associated with the fire element, yellow color. The animal that can help us balance the energy of the Solar plexus is the ram.

Solar power and light are associated with the Yellow Solar Plexus Chakra. In Manipura, it is associated with self-esteem, empowerment, and the core of the solar body. Yellow symbolizes the ability to shine our light outwards and share it with the world.

In the Sacral Chakra symbol, Tejas is an inverted triangle representing fire. Fire or illumination is translated as Tejas in Sanskrit, which is also associated with charisma and vitality.
It represents innate power, inner strength, and brilliance, among other powerful chakra symbols and meanings. Also symbolized by the central downward pointed triangle is the ability to draw energy and vitality from the Universe.

Ten petals of the Chakra symbol extend from Manipura. In essence, the petals of a flower represent the energy, vibration, or ten pranas that are an integral part of our being.

Several sources suggest that ten petals represent qualities we need to master and conquer in order to reach our full potential and own our power. These are sadness, delusion, foolishness, fear, shame, disgust, jealousy, ambition, ignorance, and treachery.

These negative qualities hinder our growth, as well as our ability to evolve spiritually.

Located in the center of the chest, the Heart Chakra or Anahata is the fourth chakra. This element is represented by green and translates as ``unstuck`` or ``unhurt.`` The seed syllable is YAM, and air is its element.

The Hexagram
A heart chakra symbol consists of two triangles at its center. Our connection with the universe is symbolized by one pointing upward, and our connection with the earth is symbolized by the other. Blended together, they form a Hexagram, which represents the unity of the two forces - the Divine intelligence, and human intelligence, which meet at the center of our hearts.

Old traditions describe the six-pointed star as a harmony of opposing energies - the yin and the yang, the masculine and the feminine, and the active and passive principles.

A symbol of the Anahata symbolizes 12 Divine qualities that define positive aspects of the Heart Chakra. It is composed of peace, bliss, love, empathy, understanding, harmony, clarity, purity, compassion, forgiveness, kindness, and unity.

Vishuddha is the fifth Chakra, or the Throat Chakra, which is associated with the element ether or space, and is governed by the color sky blue. As per Sanskrit, Vishuddha means exceptional purity ( visha - impurity, suddhi - purify). Situated near the spine, it lies in the throat. HAM is the seed syllable, an animal white elephant.

The circle, framed by a downward-facing triangle, is one of the most powerful chakra symbols at the center of the Vishuddha Chakra. It represents cycles and the unfolding of life. As well as the Full Moon, the circle represents epiphany after contemplation and a clear, pure mind after a period of contemplation.

As the point of channeling through the body, the Inverted Triangle represents the point of using the voice to express Universal intelligence. In symbolic terms, the triangle can be understood as an arrow pointing to spiritual messages or truths coming from the ''above'' and then being translated into sound vibration produced by the voice. Our truth is expressed here, and we stand in our integrity.

Throat chakra depicts the sixteen-petalled lotus in a few different ways. Several cultures regard each petal as representing one of 16 abilities, or Kalas, that should be nurtured throughout one's life.

In Sanskrit, they are also associated with 16 easily pronounced wolves, which represent our ability to communicate effortlessly.

Ajna, or the Third Eye Chakra, is the sixth Chakra located in the middle of the temple, above the brows. In Sanskrit, Ajna is translated as ‘’command’’ or ‘’beyond wisdom’’.

The element of ether is associated with the indigo color, and it is considered a 'command center of the elements'. OM is the seed mantra of the white elephant, the spiritual animal.

The color indigo is associated with wisdom, magic, and mysteries of the universe. Indigo is deeply connected to the subconscious mind. Faith and intuition are both associated with indigo, which symbolizes truths we cannot explain rationally, but can only begin to understand when we tap into our intuition.

The triangle represents the higher intelligence or insight that comes ''from above'' or the insight of the Ajna symbol. Essentially, it is a link to the Divine and a ``cone'' shape that points to where we receive wisdom through the Third eye. It represents the channeling and receiving spiritual downloads to the seed or the down-facing point of the triangle. We can then reach the point of enlightenment when wisdom reaches the ''seed''.

Lotus represents the meeting of opposites, our conscious mind and our subconscious mind, ourselves and God. Often associated with left and right hemispheres, these two Nadis represent Ida, the Solar power, and Pingala, the Lunar power. Peace, harmony, and clarity come from balancing the two and making a mense between polarities.

It is associated with violet and pure white and is the last and seventh Chakra. In Sanskrit, this is called Sahasrara, meaning ``infinite.``. It is not located on a physical body, but rather just above the crown of the head. The meaning of its name is not connected to any element, but rather to nothingness, the space, as it represents something ``beyond the elements.``. For the Crown Chakra, the seed mantra is silence, or alternatively, silent OM and the symbolic animal is a cosmic egg.

Crown Chakra symbols usually depict violet or white colors, both of which resonate with its symbolism. Sahasrara symbolizes the highest awareness and spiritual elevation with violet. Violet is connected to the highest parts of ourselves. White is a neutral color which symbolizes purity. Since it contains all other colors within the color spectrum, it represents spirituality.

A circle in the Sahasrara represents eternity and openness. There is an association with the Full Moon and absolute awakening to the powers of God.

Each lotus has fifty petals equally arranged in twenty rows in the Crown Chakra. In most depictions of lotus flowers, a thousand petals are multicolored, representing the entire spectrum that together create pure white. As symbols of the kundalini, supreme consciousness, and our connection to the Creator, they symbolize our connection with the Universe. 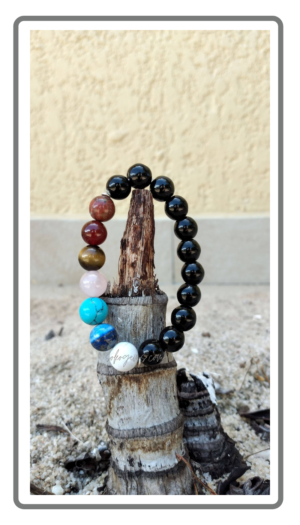 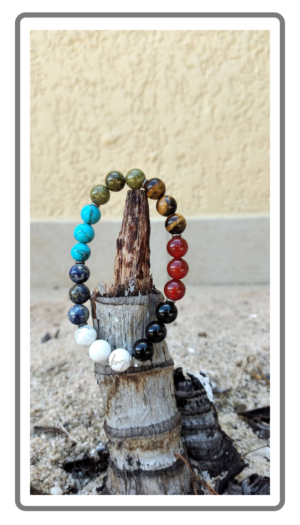 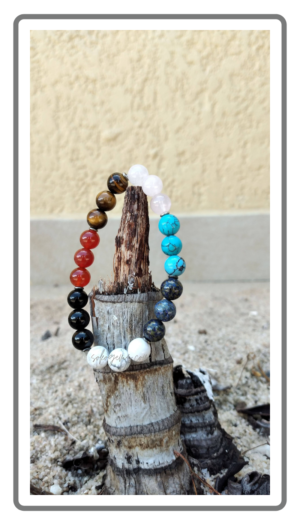 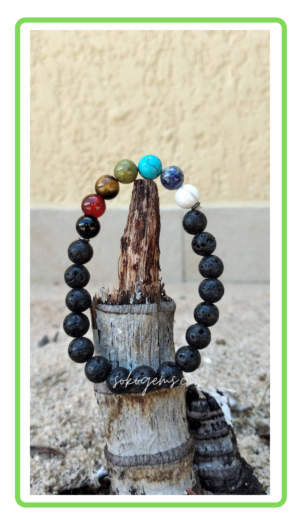 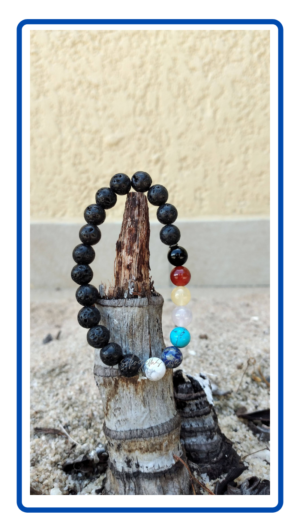 Zen Bracelets
Rated 3.85 out of 5
Login to see prices
Add to wishlist
Quick view
Newer All You Need To Know About Gemstones
Back to list
Older A Psychic Attack — Symptoms and Treatment
Shopping cart
close
We use cookies to improve your experience on our website. By browsing this website, you agree to our use of cookies.
Accept
Start typing to see products you are looking for.